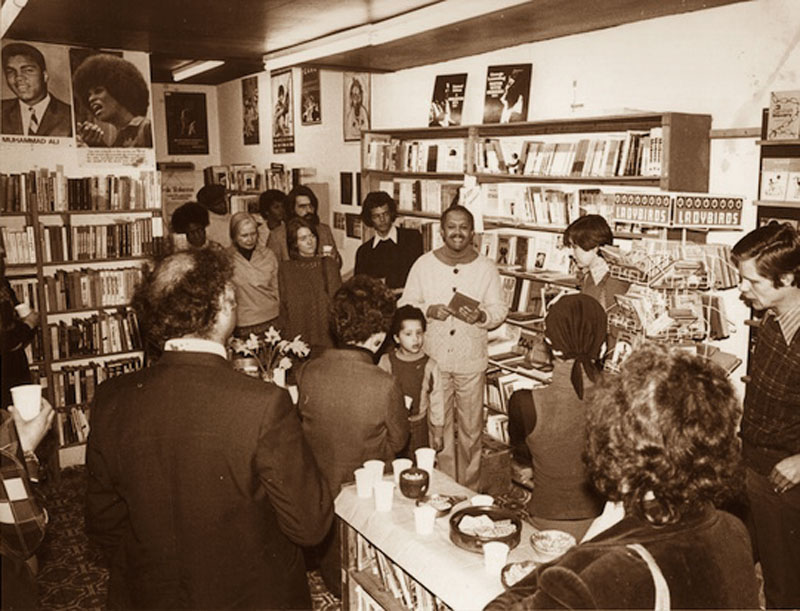 Book launch for The Poetry of Nicolas Guillen in the New Beacon Bookshop, March 1976

Caribbean bookshop New Beacon Books is to close on the eve of its 50th anniversary due to pressures from e-retailers such as Amazon, its owner has said.

Speaking on the decision to close the shop, White told The Bookseller that the current physical bookselling market and the growth of online retailers such as Amazon have made surviving difficult for independent booksellers. White said that the shop used to receive specialist orders from libraries and institutes but that cuts to funding have meant that this is “no longer the case”.

Although the retail operation is closing, White insisted the move represents a new chapter for New Beacon Books (NBB), and the company still intended to run events. The George Padmore Institute (GPI), an Afro-Caribbean archive chronicling the literary, cultural and political history of black Britain, was founded above the shop in 1991 and will continue to operate.

Earlier this year, discussing the shop’s 50th anniversary, White said: “While New Beacon’s achievements deserve to be recognised and celebrated, both the GPI and NBB are very well aware that the world of books and publishing have changed enormously since 1966 and it is unrealistic to continue operating in the same old way.

“In 2017 New Beacon will be undertaking a reorganisation so its traditions and vision can continue into the future though not necessarily within the same structures.”

Caribbean bookshop New Beacon Books has decided to remain open due to the fantastic response from the public following the announcement of its impending closure.

In December, The Bookseller reported that New Beacon Books was set to close after 50 years. But before closing its doors ‘officially’, the owners decided to make a “concerted effort to raise awareness and let people know that the shop existed.

Vanessa La Rose, wife of the eldest grandson of the shop’s co-founder John La Rose, is part of the team fighting to keep the shop open.

She told The Bookseller: “We realised that although the bookshop had been around for the last 50 years, there was no real effort to keep up with the times – no website, no advertising etc. We wanted to give members of the public an opportunity to acknowledge our history and potentially visit the shop.

“Whilst a number of independents have closed due to rising business rates and online competition, a few still remain. They have managed to diversify and roll with the times. Something New Beacon wasn’t doing.“

Following the creation of a Facebook and Instagram page at the end of January, the shop immediately saw a huge uptake of supporters. The shop’s crowdfunding campaign went live on 3rd March and met its £10,000 target yesterday (23rd March ’17).

La Rose said: “The response from social media and beyond has reaffirmed to us that there is a place for New Beacon Books in the community. Whilst there are people that shop online there are still people that like to browse in a bookshop.”

La Rose added that the shop has a very important part to play in showcasing black history in the current political and cultural climate.

“We are more than a small diversity section in a mainstream bookshop and we also provide opportunities as a publisher too”, La Rose said. “We are here to educate all people about the diversity of black culture and beyond. We want to be able to create a space where members of the community can speak, young people especially can express themselves and learn.”

The money raised from the Go Fund Me campaign will be used to aid website creation, make vital shop repairs and start renovations to bring the shop – which “hasn’t been touched since the 80s“, according to La Rose – up to standard.

The shop, which is currently operating under reduced opening hours, intends to put on book signings and book reading for children, have a community space available for hire, diversify the stock it houses and put on more events in the community. 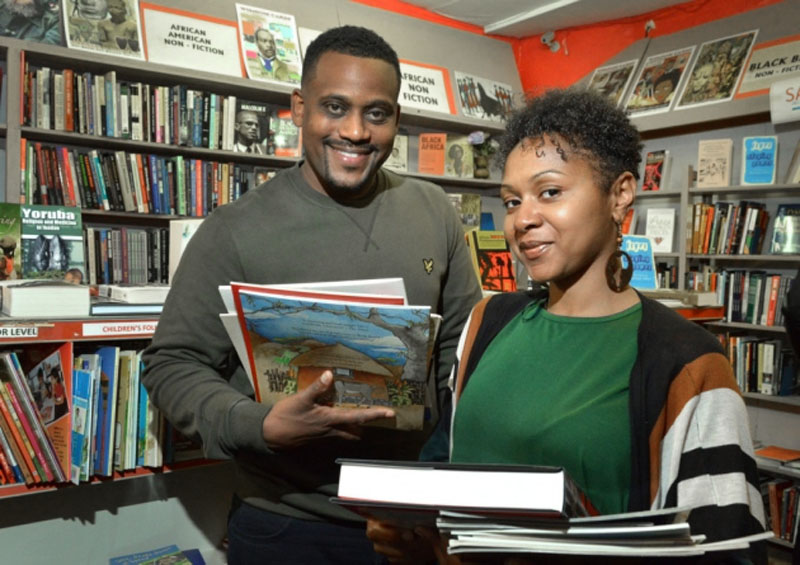 Specialists in African and Caribbean Literature since 1966 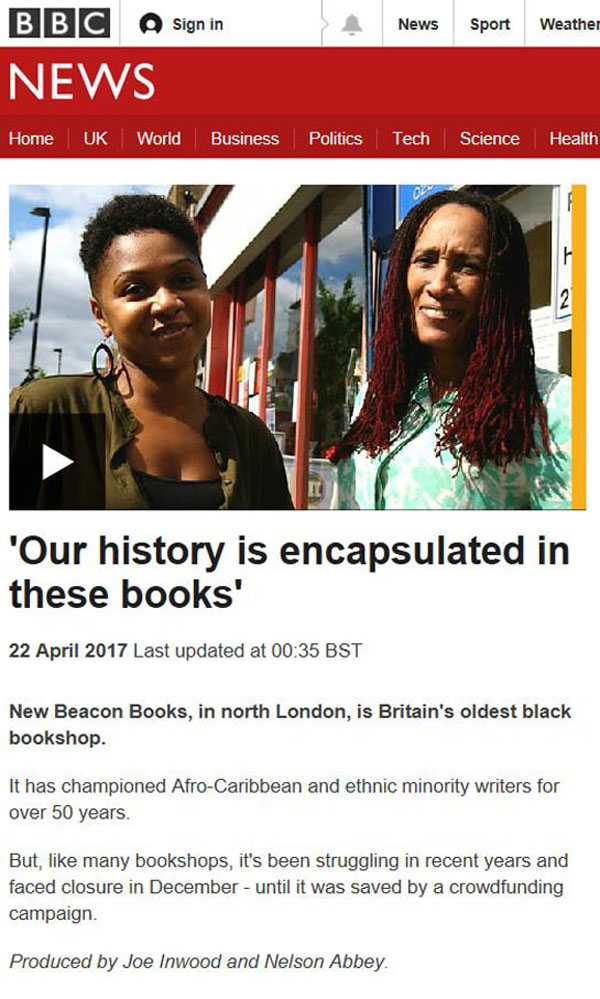 Published 15 August 2016 by The Voice – written by Carl Palmer

THE GEORGE Padmore Institute (GPI) will be organising a series of exciting events this autumn to celebrate the pioneering achievements of New Beacon Books since its formation in 1966.

Apart from its book trade, New Beacon Books has been at the centre of many ground-breaking political and social projects, organisations and campaigns. These include, among others: the Caribbean Artists Movement (1966-72), the International Book Fair of Radial Black and Third World Books (1982-1995), the New Cross Massacre Action Committee (1981) and the Committee for the Release of Political Prisoners in Kenya (1980s).

New Beacon’s ethos is to connect different generations of black, Asian and minority ethnic populations by passing on knowledge of BAME history via grassroots independent organisation and their ability to build strong foundations via committed networks. In doing so, they have paved the way for many important political, social and artistic organisations which exist today.

New Beacon’s success is testimony to the endeavour of the UK’s first and second generations from Africa, the Caribbean and Asia to transform British society into a place which, though far from perfect, is far more diverse, multicultural and tolerant than five decades ago.

The heart of the 50th anniversary celebrations is the appointment of a Poet in Residence for three months at the George Padmore Institute.

Black British poet Jay Bernard will explore the GPI’s unique archives (including the recently catalogued personal papers of New Beacon Books founder, John La Rose) and will produce a set of poems which creatively reflect on the archives she finds. Her poems will be published in a special commemorative booklet, which will also include an essay by Dr Ruth Bush on the early years of New Beacon’s publishing.

A major highlight is the International Poetry Night, recreating the spirit of the Black Radical Book Fairs, to be held at the British Library on 3 December.

Jay will read her new poems alongside a diverse group of writers from around the world at an event compered by internationally acclaimed poet and GPI Trustee Linton Kwesi Johnson.

Preceding the poetry night, on the afternoon of 3 December, renowned activist and educationalist Professor Gus John will give a keynote speech on New Beacon Books, its work and legacy.

Sarah White, Director of New Beacon Books, said: “While New Beacon’s achievements deserve to be recognised and celebrated, both the GPI and NBB are very well aware that the world of books and publishing have changed enormously since 1966 and it is unrealistic to continue operating in the same old way.

“In 2017 New Beacon will be undertaking a reorganisation so its traditions and vision can continue into the future though not necessarily within the same structures.”

These celebrations, then, aided by an Arts Council England grant, mark the end of a crucial 50-year-old chapter in Black British history and the start of an exciting new era. 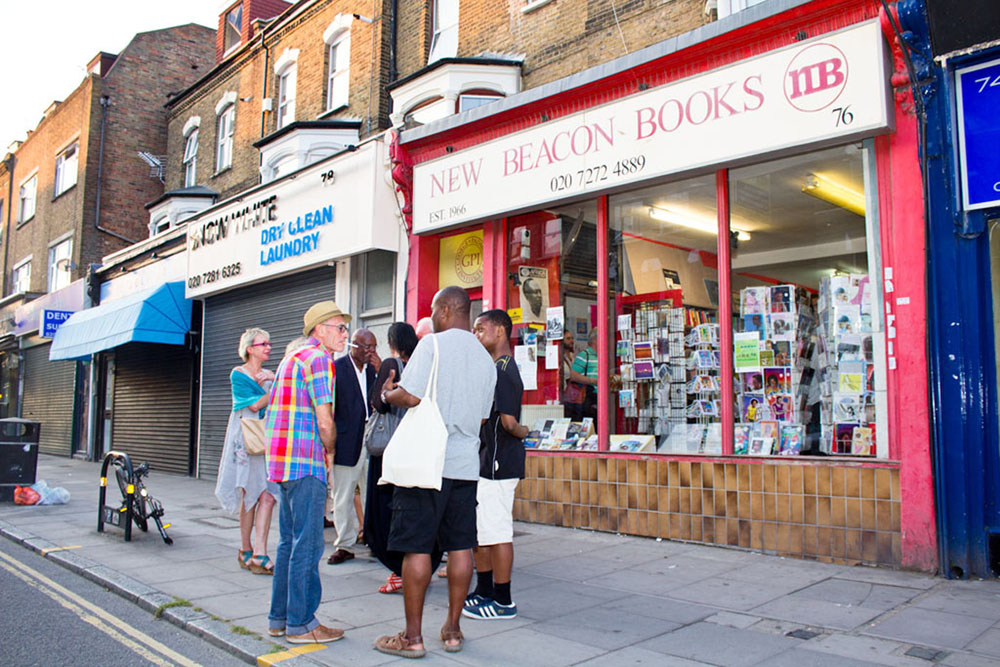