Jeffrey Town: Where self-reliance is more than a word

These days, there’s a lot happening in Jeffrey Town, St Mary. The community is getting prepared for its second annual Breadfruit Festival, even as its organisers, the Jeffrey Town Farmers’ Association, celebrate winning the 2006 Michael Manley Foundation Award for Community Self-Reliance.

That award, which comes with a cash grant of $200,000, was given in recognition of the work the group has been doing in the community, first for laying miles of pipe to bring water to the hundreds of residents, and second to support the group as they construct what is to be the Jeffrey Town Community Multi-purpose Centre.

Two Fridays ago, members of the farmers’ association were out in full force at the work site, with members of all ages pitching in to pour the concrete floor of New ‘Zealand’, as the basement of the new centre is called. It was a hot morning, but seemed quite like an erstwhile rural Labour Day, with children running about trying to help, women stirring pots over to one side, and men all in work boots hustling about the unfinished building.

“We broke ground here on the 28th of April, and we’ve had one week where we had three or four men working, but everything else has been done on weekends and in the evenings,” said the group’s secretary Ivy Gordon, a home economics teacher at the nearby Guy’s Hill High School.

When it is finished, the centre will house the association’s office, a multimedia and resource centre, and several multi-purpose rooms. ‘New Zealand’ will serve as a storeroom for the group’s agricultural supplies such as seeds, feeds, tools and pesticides.

So far, community members have been the ones donating time and resources to the building, and have already put in at least 1,300 volunteer hours among them. They expect to finish the building in about five months.

The centre is the latest of the group’s projects, but certainly not the first the community has pursued, relying almost completely on local volunteer labour.

The Jeffrey Town Farmers’ Association was formed in 1991, when a handful of farmers in the area got together to explore ways to get the agrarian community to support itself and once again thrive off the land.

At the time, the community, which once relied heavily on the income generated by milk production and bananas, was in major decline, as Jamaica’s milk industry was in its last throes and farmers in the area suffered typical cyclical farming problems such as drought and glut.

Theirs were the typical problems, but chief among them was the issue of rural to urban migration, particularly of the younger generations.

“We got together and decided to do a kinda club thing,” explained Barry ‘Uncle Barry’ Bennett, one of the association’s founding members. “We start to throw our partner, and after, we found we could do other activities like cultivating, and farming together. We started by doing poultry and after poultry we got into cattle rearing. After cattle we saw the necessity of the water, so we joined together and started to do the water business, and from then we did all that till we reach here,” he added, pointing to the unfinished building.

Bennett, his brother Lucien ‘Maas Lou’ Bennett and Roy Archer, both of whom had lived in England for many years and have returned to Jamaica, were all part of the original group that met and decided to start farming, buying and selling in bulk.

“We would meet every Sunday night, and everyone had to throw their $20 dues, and we managed to do a lot of small things like buying fertiliser and pesticide,” said Archer, who is the current treasurer of the association.

The organisation took years to develop, but in the time, the members have managed to improve their knowledge base, through their own effort.

“We went to seminars, all around the country, at our own expense, to see how other co-ops and people are doing, to see what ideas we can bring back to Jeffrey Town,” said Archer.

That tradition continues, and just three weeks ago, a delegation of 10 of the association’s youth members travelled to Clarendon to participate in a computer, management and entrepreneurship training seminar to help them manage the centre when it opens later this year.

Before they started the centre, the association’s biggest project was the laying of a pipe system to bring water to the community, a feat which earned the group kudos from as far away as Denmark and South Africa. After years of poor, intermittent and unreliable water supply, the residents were fed up, and decided that they would do whatever it took to get the precious resource.

“After long negotiations with the National Water Commission, they told us that they didn’t have money to pay the 12 contractors to run the pipeline, but if we can run it we could go ahead,” explained Archer.

With the help of their member of parliament and technocrats from the LIFE project, the group got funding to offset the costs, called a meeting to get approval from the other residents and went ahead with their plan once the community voiced its support.

“We got $679,000 to buy two water pumps, one to divert the water from somewhere else and one to pump it to Jeffrey Town,” said Archer. “The NWC gave one back hoe, one truck, one driver, a supervisor and a plumber and told us if you want water, get on with it.“

Eight weeks later, and with the off-and-on labour of about 80 community members, the three-mile pipeline was completed, and the community was not only pleased, but energised and empowered by their own achievement.
“We took them on at their own game and now we have water,” said Archer proudly.

Today, the group is busy, and thriving with members of all ages from the community working together on several projects. Right now, for instance, while some members work on the new building, others will be planning and preparing for the Breadfruit Festival, which takes place on August 20. This year, said Ivy Gordon, the community will be expecting a large turnout, and residents, who are the ones who have rented the 30 bamboo stalls, are also expecting to cash in on the action.

“Last year, we did very well,” said Gordon. “And all the people in the community benefited in some way; some were vendors, some were hired to build the stalls and prepare the Salisbury Playfield, and some just capitalised in other ways.“

Between now and August 20, all attention will be focused on the festival, but right afterwards, said Gordon, there will be lots of work to be done.

“September 1 is when we usually sit down and make our plans for the year, so when the festival is over we need to tally what we’ve earned plus what we’ve received with this grant and make some decisions,” said Gordon.

The community of Jeffery town is located in western St. Mary, nestled between Gayle and Guy’s Hill. The community comprises of several districts as specified by the Social Development Commission: Barker, Salisbury, Coffee Walk and Top Road. The community is located several kilometers from the resort town of Ocho Rios and the market district of Linstead.

Jeffery town has come a far way in terms of development; from the famous dollar a mile taxi, operated by a returning resident, to proper roadways, the construction of the Enid Gordon Maternal Clinic and also the establishment of a Multimedia Centre and its own Community Radio Station- owned and operated by the Jeffery Town Farmers Association, a community group working for the development of the community. The school, which is housed in two trailer bodies, is still struggling to keep the number of students in its doors; a dilemma which took the establishment after it was gutted by fire in 1996. The Jeffery Town Primary School now has an enrolment of approximately 100 students. Notwithstanding, students from Jeffery Town continue to excel in the G-SAT examination, earning places is some of the most prestigious schools in Jamaica. Many past students have tone on to become great leaders, politicians and serving in various walks of life in Jamaica and in the diaspora. The school has an active past student’s association with branches in Jamaica and North America.

The community has its own colourful history, the name coming from an affluent family which owned the lands (Salisbury Estates) and slaves back then in the 17th century. The community has come a far way yet there is more room for development, we aim to make Jeffery Town a model community in Jamaica and the Caribbean at large. It is with these things in mind that we implore you bloggers to assist and contribute to community development in all ways you can. 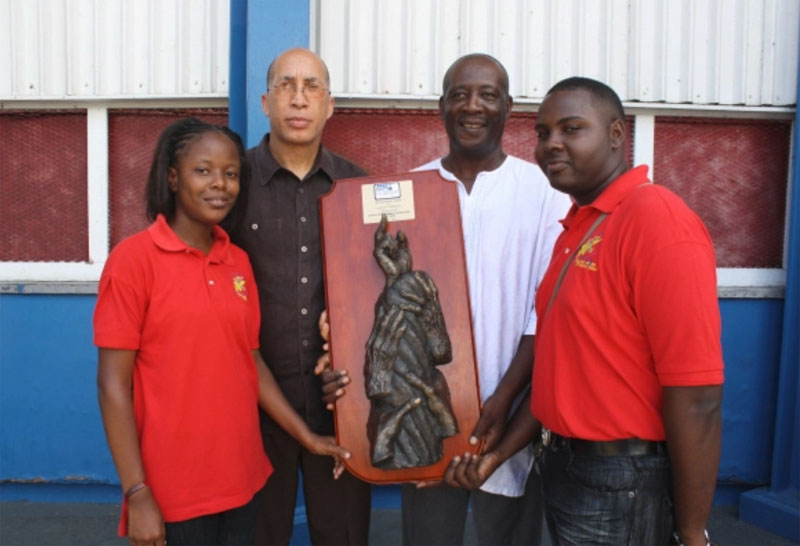 Jeffery Town Farmers Association of western St Mary was recognised for its strides in self-reliance, winning the Michael Manley Award for Community Self-Reliance at the Little Theatre in St Andrew on August 1, 2011.

Returning residents to Jeffrey Town in 1991, after observing the demise of crops such as banana, cocoa, coffee and citrus, set about establishing a co-operative in the community. And although the venture did not succeed, the community would later organise themselves to take on other ventures. The Farmer’s association employs various farming and agricultural technologies to improve production and income generation; including terracing and gabion baskets to prevent soil erosion.

The community members, some of whom were trained at the Caribbean Institute of Media and Communications, volunteered to work on the radio stations. Internet service is provided for the community at hot spots.

The multi-purpose centre, which houses the radio station is powered by solar panels and a wind turbine, thereby reducing the energy cost to the community. There is also a community plot where animal droppings are collected for manure and leaves gathered for compost.

Levy said the branch off into technology represents “an innovative approach to attracting youth participation.”

He also said the movement towards organic farming is “…a step that could bring Jamaica’s agriculture into an area for which there is a growing market.”

Wordsworth Gordon, president of the association, told The Gleaner that his community stands firmly in the corner of self-help. “We strongly believe that we have to depend on ourselves. We have to use our own ingenuity to make our community better.” “We have done many, many things in the community such as bringing water to our community, soil erosion, best practice in agriculture, a multi-media centre and community radio station,” he said of self-reliance projects undertaken by the community.”

“Winning inspires me. No disrespect to any other prime minister, but Michael Manley was my inspiration, and I totally believe in the idea of self reliance,” Gordon said.